We recently updated our WordPress magazine theme Domino Magazine, adding in a new layout, new colour schemes and some of the most-requested features from our customers.

The updated theme now reflects the latest trends in WordPress magazine themes, which begs the question: how have trends in magazine themes changed since they first appeared roughly a decade ago?

We’ve dug into our archives to find out how the WordPress magazine themes has evolved in the last decade – and looked at some of the most innovative trend-setting magazine sites around to see where things are going next.

Magazine themes were the evolution of simple blogging themes

Magazine themes first evolved out of a desire to evolve the blog layout from a simple offering of blog posts listed in reverse-chronological order to something which would display a lot more posts on the homepage, letting the visitor choose what they wanted to read from a selection of stories in different categories.

The “magazine style” monicker was coined to describe the rough similarity to a magazine’s contents page. A lot of themes at the time referred to themselves – probably more accurately – as “newspaper themes”, but the trend never seriously caught on and the magazine label has stuck ever since.

Magazine themes were some of the first WordPress themes you could purchase and responsible for kicking off the whole industry. Our first two themes, Yamidoo Magazine and Zenko Magazine, were released in early 2009 and fitted this mould:

Yamidoo Magazine is still in our theme collection, albeit having received 25 updates since its release :)

The major innovation which made magazine themes possible was the use of featured images and automatically generated thumbnails. These made the magazine layout work: before these came along there was no easy way of creating featured images for posts at different sizes. Whilst the solution, which required the URL of the desired featured image to be pasted in a custom field, was by no means elegant, it worked and magazine themes took off.

The core WordPress software started catching up with the innovation theme developers were pushing, and soon features such as featured images and automatic thumbnail generation were added.

This let developers replace their previously hacked-together solutions (such as utilising the TimThumb image resizing script, now infamous for its security vulnerabilities) with “official” solutions which improved the user experience and lowered the barrier to entry for using a magazine theme.

This period also saw the professionalisation of the WordPress theme industry: this was when WPZOOM really took off. We professionalised our development process, hired new staff and switched all our themes over to a single internal framework. Theme options pages were in and these themes flew off the shelves. 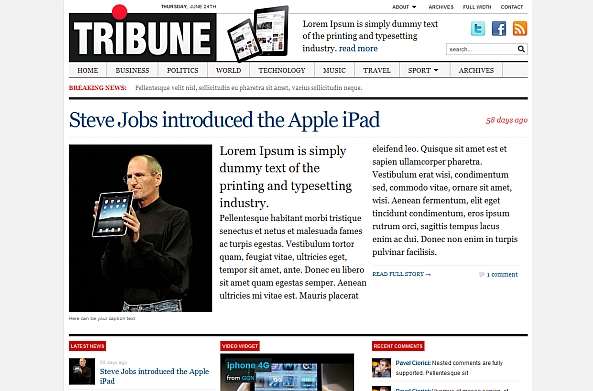 Tribune is a popular magazine theme we originally released in 2010

During this phase we released themes like Magazinum, OriginMag and Tribune. These themes were really easy to use and brought good design, ease-of-use and really high quality end products to the masses. Easier-to-use themes were in part responsible for the huge growth WordPress experienced during this second phase.

The trend here was to offer built-in colour schemes but have the option to customise colours individually, and customisable layouts using widgets. There’s been a transition from theme options page to using the Customizer, and a general focus on usability and delivering a great user experience.

Themes we’ve released recently come under this fold. Insight, for example, uses intelligent widgets to adapt the number of posts on the homepage to your preferences. This also delivers the trend-setting hero-style integration of featured images into the design – something we’ll come back to in the next section.

Insight uses widgets to let you choose how the homepage displays, with the design responding accordingly.

In my opinion, we’re reaching the end of the third phase and in the next twelve months or so we can expect the “next stage” to emerge. But what does this look like? I think the future is really bright here and we can expect to see more sophisticated themes making the more nuanced features found in custom designed sites available to the masses through premium WordPress themes.

Next trends for magazine themes: it’s all in the details

What’s next for magazine themes?
For this, I asked Pavel for his insights – he’s the expert here as he designs the vast majority of our themes. The recommendations and sites here are from Pavel’s personal collection. Two trends stand out as likely “next steps” and future looks for magazine themes.

It’s increasingly common to see designs from top-tier agencies set new trends in web design, with these trends filtering down into WordPress themes. These bring the best and most innovative trends in web design to a mass market at a significantly lower price.

A great example of trend setting is the work done by Area17, a leading digital agency. In recent years Area17 has worked on sites for Engadget and Quartz; both of these are WordPress.com sites with revolutionary designs.

Quartz is a great case study: the original design was one of the first “mobile first designs and offered a revolutionary reading experience, where Area17 were literally told to ignore desktop when designing the website. The idea of mobile first rapidly caught on, with Karen McGrane’s book playing a major role.

Quartz’s website has since been refined, but the design still fits the mobile first philosophy and is arguably now just a more sophisticated evolution of the original site.

We’re yet to see WordPress themes which can match Quartz’s level of sophistication, but we’re also probably not too far off. All good WordPress themes are responsive, but few are truly as mobile-first as Quartz. After all, mobile first is not necessarily appropriate for everyone.

The trend of having featured images more tightly integrated as part of the theme’s design and story for each article is reflected in our recent update to Domino Magazine 2.0, where we’ve added new homepage widgets and generally tightened the design.

A second trend is featuring stories with a full-width “hero” banner, where the featured image shows as a full-width background. This is something seen on sites such as The Century Foundation, Republic.ru and Quanta Magazine. This gives authors a way of featuring an individual post – typically a longer feature – whilst keeping the flow of the rest of the homepage in tact.

We’re starting to see this done in WordPress themes, but this tends to be for featured pages rather than posts. Inspiro, for example, does hero banners really nicely, albeit for pages. Right now there’s no easy way for WordPress to handle the featuring of individual posts, but this may well be somewhere where we see WordPress core catching up in a couple of years.

A variation on this trend is breaking up the magazine layout with bespoke subscription offers or features. This is seen on Quartz with the signup box for their (really excellent) daily news email or lifestyle magazine Kinfolk with details about the latest issue of their magazine.

This is something WordPress is able to do very well through widgets or a page builder (Foodica, for example, has a neat three-column hero widget), although we’re yet to see anything with quite the level of sophistication and style as found with the two examples above. Watch this space on this one.

Stay tuned for what’s next

WordPress magazine themes have come a seriously long way in the last couple of years and that trend is only going to continue. Expect to see more sophisticated magazine themes which are increasingly flexible, professional and easy to use.

WPZOOM was one of the first theme shops to come out with a magazine theme and we’ve peppered this article with examples from our collection over the years. If you’re inspired to check these out then you can see our full WordPress magazine theme collection or find out more about the recently updated Domino Magazine.

Whether you get a magazine theme from us, one of our theme shop friends or come back in a couple of years when the future is even brighter, you’re in for a great deal.

Hey, I'm Alex! I run Ellipsis Marketing, where we solve marketing problems for WordPress businesses – including WPZOOM :) Say hi, or get my weekly newsletter for WordPress professionals.