Tribune theme was released more than 3 years ago, and as things evolve day by day in web industry, we decided that it will be a shame to retire such a beautiful theme, so instead we updated it with all the needed features which would allow it to compete with other modern themes. 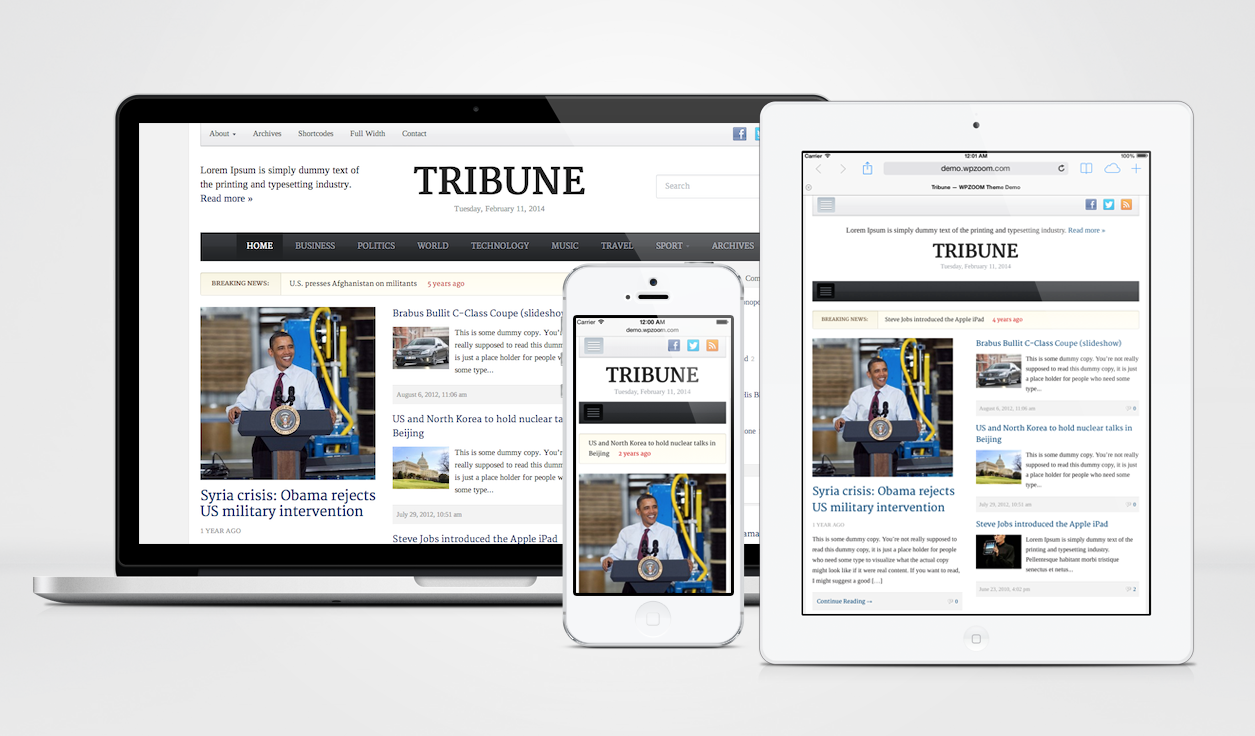 Many of you asked us to make this theme responsive, so I’m pretty sure that you already know what this feature means, and you don’t need any extra explanations.
You can see in the demo how the theme adapts to different screen resolution for specific devices. Test-drive the theme.

Overall the layout of the theme wasn’t changed, however a lot of work has been done with little things. The header area is now much better organized, and on the left hand of the logo an ad slot is available, but you can also use it to insert any HTML code you want, just like we did in the demo.

The previous breaking news bar was useless and it allowed you to enter only HTML code manually every time you wanted to add an update, but the new version includes a more complex breaking news ticker which now displays selective posts that you can mark individually to appear there.

… and many other improvements

Besides the above-mentioned features, we’ve made important changes to existent widgets and added new ones, such as: Most Commented Posts, Most Viewed Posts and Carousel. We’ve also added a Tabbed Widgets area in which you can add any widgets and they will appear as tabs.
The Footer Slider was replaced with a widgetized area in which you can add the new widget called WPZOOM: Carousel.

Planning to update from an older version?
You can download the new versions in Members Dashboard.
If you haven’t made any modifications to your theme files, then you can overwrite your old version with the new one.
If you have made modifications to your theme, then you’ll need to follow this tutorial for more instructions, but we’d highly recommend installing the new update as a separate theme, as most of the theme files were modified, and there is no list of modified files in the new version.
Don’t forget to run the Regenerate Thumbnails plugin and configure your widgets after upgrading to the new version.

For more detailed features, see the theme’s page or check out the live demo of this theme.

I'm the founder of WPZOOM. I am from Moldova, but currently live in Amsterdam, Netherlands and I love to design functional WordPress themes.